“Some times you have a dream; and other times the dream has you.”
Dan M. Kalin 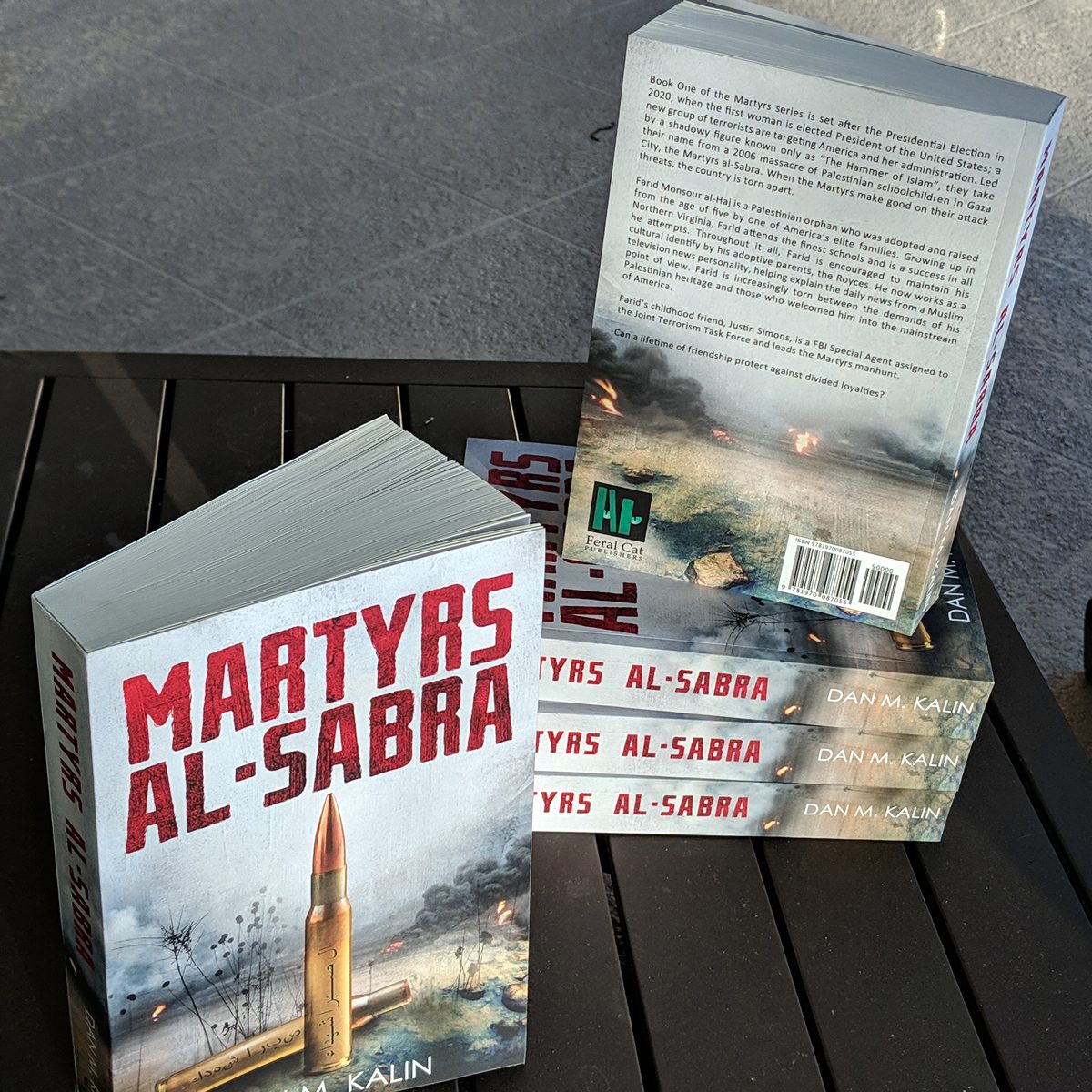 The first Martyrs al-Sabra print copies were received today and I am very pleased with the results! They have been available for purchase for a week or so, but it took time to generate first articles.

You’re never quite sure whether the finished version is right until you hold it in your hand. Holding more than one in your hands is even better. They have that new book smell!

This book fills in detail surrounding Sammy Hagar’s life and times up until about 2011. Don’t read the book expecting a rock star to write well; it isn’t what the book is about. If you read at an tenth grade level, it is about right. There is also a fair amount of inconsistency in terms of contradictory opinions, and either he’s changeable or he feels it necessary to compliment before criticising. I landed on it probably being the latter.

I’m not especially a big fan of Sammy’s musical work, but I did find the detail interesting to read. He grew up a few miles from me and when he described the place I knew exactly what he was talking about; small one-industry California town doomed to slide even further into the abyss of poverty. I got out and never returned. Sammy got out and went back to become a local landlord after making it. Kudos!

Another note: I enjoyed reading his account of events surrounding the changes in Van Halen. Regardless of whether you’re “Team-Ed”, “Team-Dave”, or “Team-Sammy” his account is probably the most credible in my opinion. Over the years, he has consistently been the hardest working, most fun-loving, and quite likely the happiest of the group. If you are a fan, you’ll enjoy the book.

“Good things have a short half-life, entropy WILL have its way.”
Dan. M. Kalin

Anytime an author starts chapters with character names, locations, and year you know the story will not be told in a time-linear fashion. I’m fairly easy to confound, as I treat characters kind of like variables when reading, until I’m connected enough to know their names. Names are hard, even in real life. So I confuse easy with a format like that, but all it means is an occasional retrench to pickup connections I didn’t on the first pass.

This book has it all, vampires, vampire-hybrids, vampire-cat (yay!), Greek gods, native American spirits, werewolves, ghosts, fates, and someone who wasn’t characterised so easily. As a story, the reader might feel this to be too non-linear for them. However, if you enjoy experiential reading, where plot arc is secondary to living within that world, this book qualifies with bells on!

Obviously, I inhabit the latter category.

Book One of the Martyrs series is set after the Presidential Election in 2020, when the first woman is elected President; a new group of terrorists are targeting America and it isn’t business-as-usual. Led by a shadowy figure known only as “The Hammer of Islam”, they take their name from a 2006 massacre of Palestinian schoolchildren in Gaza City, the Martyrs al-Sabra. When the Martyrs make good on their attack threats, the country is torn apart.

Farid Monsour al-Haj is a Palestinian orphan who was adopted and raised from the age of five by one of America’s elite families. Growing up in Northern Virginia, Farid attends the finest schools and is a success in all he attempts. Throughout it all, Farid is encouraged to maintain his cultural identify by his adoptive parents, the Royces. He now works as a television news personality, helping explain the daily news from a Muslim point of view. Farid is increasingly torn between the demands of his Palestinian heritage and those who welcomed him into the mainstream of America.

It can also be found at Smashwords, Kobo, Scribd, Barnes & Noble, Apple, and others now. Paperback will be available in several weeks.

I’m still laughing from something Maurice just told me and thought I would share.

“When you’re dating and get to see her bookshelf for the first time, take a few moments and read through the titles. If a full shelf consists of worn self-help and wisdom-of-dead-mystics titles, RUN! Don’t take time to scream, just run. You’ll thank me later.”
M. McNulty

Before anything else is said, if you are a Monty Python fan first and a John Cleese fan second, this book might be disappointing for you. The author covers his life from fetus through the O2 reunion show, but the section concerning the Pythons is very abbreviated (less than five pages). Who knows, maybe details there will be in a different book.

Regardless, this book is well written (and why wouldn’t it be given the author is first and foremost a writer?) plus an easy read. I very much enjoyed reading anecdotes about Cleese working with many of the UK’s premiere old-school comedy talent. I was familiar with their work but not that they had been affiliated with Cleese early in his career. It was also interesting to read that some of my favorite Python sketches were previously performed on other shows prior to the formation of Python.

One book scene I can definitely picture, Cleese and Chapman writing a sketch. Cleese not sure sketch is funny and keeps asking Chapman if it is; Chapman stating unequivocally that it is, with the dead certitude he showed on-screen many times in memory. Amusing mind video. It is one of the famous sketches, so I won’t spoil it.

All told, I would buy the book knowing the above, maybe you should too.

I thoroughly enjoyed the book, with its abundant references to song lyrics and popular culture, both cited and uncited, with many Easter eggs to be discovered. I think being immersed within this author’s stream of consciousness would be hugely entertaining.

The content is broadly humorous, although it tackles a very serious issue. I am usually able to ignore the fact most religions declare themselves the only truth, with dire consequences for all others. It is appalling how many “heavens” allow for the righteous to directly view the ongoing suffering of those who weren’t. Kind of a Romanesque dinner theatre for the rest of time. With humor, it is easier to digest without a competing emotional reaction (anger, disgust, etc..)

I do think the book ended abruptly, I could have gone on. But then entropy was having its way with Dirk’s angelic relationship anyway, so it wasn’t long before something climactic happened. I’m just glad she didn’t kill the cat in a fit of pique! Destroying the world is definitely a better choice.

From a book I am currently reading.

Very well put, in my opinion!