Before saying anything on Roger Daltrey’s memoir, “Thanks a lot Mr. Kibblewhite”, you have to be a fan of The Who to get the most out of the book. It is well-written and accessible, perhaps due to excellent editors, and it represented a marked improvement over Pete Townshend’s effort. As a fan, it is great to learn some of the backstory which I saw only from the audience.

Mr. Kibblewhite was an school administrator who canes young Daltrey as a child and expels him with the classic sendoff “You’ll never amount to anything, Daltrey!” True to form, the insult provides the motivational power to propel Roger to the top. As stated in his interviews, he is actually very thankful to Mr. Kibblewhite. I think everyone in our generation (yeah I went there) had someone whose early skepticism spurred us on. The story is told with a warmth which seems very genuine as well.

It covers the time period from childhood to 2016. He backs up Pete Townshend’s take on Pete’s child pornography charges, and perhaps he knows best, but I didn’t find Pete’s account completely credible myself.

I found it interesting Roger’s concert tour work with the Who didn’t make him much money over the years. To hear him tell it, touring was a crapshoot to walk away with any cash at all, especially while Keith Moon was alive. Although, after Peter Grant and Led Zeppelin broke the code on how to make touring a winner, The Who’s thieving management should have paid attention. It is very profitable when properly managed.

From his perspective, he had to tour to make money, while Pete and presumably John were able to clip coupons at home from songwriter royalties. I don’t doubt Roger made contributions in the studio, I’ve heard the demos Pete made, the Who’s band deal should have made a provision to share in the royalty stream, even if unequally. Or Roger could have written some songs on his own. Regardless, the read is an enjoyable ride and a must for any Who fan.

The month of November represented a transition month. I get to put my publisher and editor hats down for a bit and get back to writing. Most of November had zero new writing, so for this update I’ll list only the projects and their associated word count. 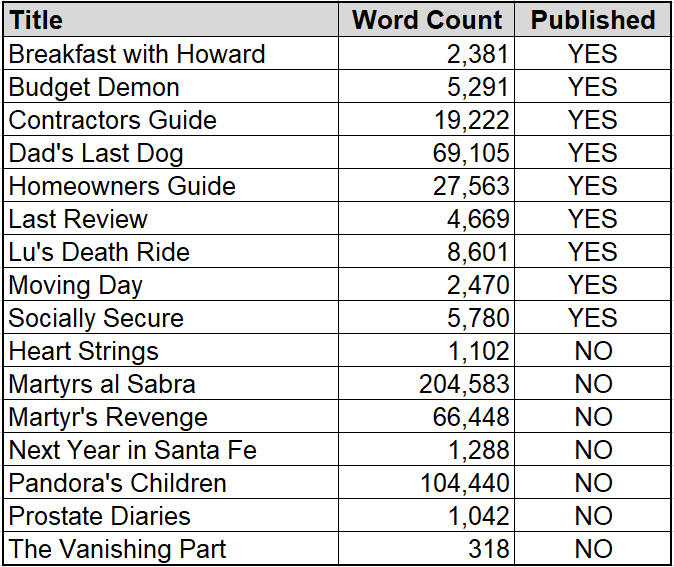 Balance Off Plumb is currently available for pre-order for many of the ebook sales channels, the print version is in final formatting and full launch is scheduled for 12/14/2018.

Martyrs al-Sabra is with the beta readers; I am making final changes to the manuscript as the comments come back. At its current state of development, I expect it to be available mid-to-late January 2019.

Pandora’s Children needs the final chapter before going into edit. Currently the target date for release is March 29, 2019.